First, I really thought I would make a diaper bag. I was really intimidated, though. And thought, “Stephanie, why are you so crazy? Just buy one.” But I’ve finished so many projects that I thought “maybe.”

I saw this diaper bag at Target and really liked it:

But I don’t love the price tag. AND I bought one diaper bag — a plain black one — that would be very good for Josh to carry around. I didn’t want to buy two. Why couldn’t I just use the plain one? So, I decided that I’d either use that one OR I’d make one if I wanted a more decorative one.

So, I found this pattern and tutorial for the Tohoku Tote on I Am Momma Hear Me Roar. I envisioned it without the bow and with a cross-body strap.

After printing the pattern, I thought it’d be a bit small for a diaper bag. So I added an inch and a half to each side and the top. I followed the tutorial really closely, except for the pockets.

THE POCKETS ARE WHERE I HIT A SNAG. 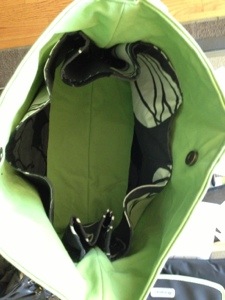 I tried to live with it. I really did. But then I realized it would bug me SO MUCH. So I ripped the lining apart to fix the pockets. I ended up having to sew the pockets on after I re-sewed the lining back together. THAT was a bit challenging. Fixing my mistake did allow me to add more pockets on the sides of the inside for bottles. I first planned to make those pockets with elastic tops, which I think I would have preferred. But I was so tired of this bag by that point that I didn’t feel like adding the elastic.

Then I used this tutorial to make the strap for the bag.

I also had to buy a heavier needle — an 18 — to sew the lining to the bag’s exterior and to sew the strap.

What’s great about this bag is that the only thing I bought for it is the magnetic clasp. I think it was about $4. I used the extra fabric from my bedroom shades and the baby curtains for the fabric. I’ve had the interfacing for years, and I stole the D-rings and hardware for the strap from a purse that was falling apart.